100% mulberry paper made by traditional methods

"My aim is to create paper while preserving the mulberry fibers in their original state as much as possible"
Ichibei's strong commitment has been translated directly into the paper itself: simple and unadorned, gentle yet powerful washi. [Translator's note: it is recognized that the fibers of various types of paper mulberry are used to make paper by hand not only in Japan, but also in China and Korea. However, it is to be expected that local variations in materials and methods will produce different results; therefore the Japanese term "washi" -- literally, "Japanese paper" -- is used.]

Fibers are cooked in an alkali bath made from ashes of the best grade of soba husks from Nasu, TochigiPrefecture, and then beaten . . . no effort is spared in realizing the best paper possible.

Since only natural vegetable matter is used, this paper is ideal for dyeing (stains such as indigo dye and colcothar dye). Because it is free of impurities (no kaolin is added), only pure Japanese paper mulberry fibers (100% Nasu paper mulberry, Broussonetia kazinoki x papyrifera, hereinafter referred to only as "mulberry") and zero chemical agents (no caustic potash soda or soda ash) are used, it should take on colors very well. Ichibei believes there are people looking for paper like this. He says users can expect the paper to take on colors wonderfully.

This superb paper represents the ultimate uncompromising mulberry paper, the pride of the washi made in the Echizen region of Japan.

September 27, 2001, clear skies
We start by making the alkali bath.

A brief detour: the flowers and seeds of the tororo-aoi plant -- Utatsu Crafts Hall
11 AM, October 2, 2001, clear skies again 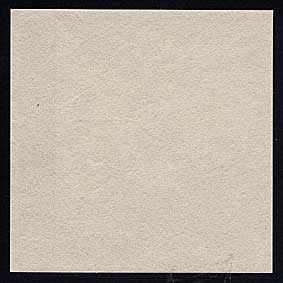 Just as the previous generation (8th generation) Ichibei Iwano, who was also designated a living national treasure, used to say, Ichibei believes it is not the technique of the artisan that makes good paper, but rather it is the water that does the work . . .
Ichibei, a man of quiet humility, gently insists on that point. Ichibei strives for simplicity and naturalness -- to take the fibers born of the mulberry plant and transform them as-is into paper.
It seems so simple when he does it, but it is in fact a great work to produce a single sheet of this "perfect" paper. And Ichibei does this every day, in his characteristically unassuming fashion.

There is a papermaking song in the Echizen region with words that may be translated as, "It's our God-given task, from one generation to the next -- father, son, grandson making paper . . . pure hearts, pure water go into the sheets, drying into the whiteness of the Hosho paper . . . "

The history of our company.

17-2,Oizu,Echizen-shi,Fukui,915-0235 JAPAN
e-mail:sugihara@washiya.com
http://www.washiya.com/
Fax 81-778-42-0144
Please contact me anything about mentions on this page, questions, opinions, etc.
Also it's more than welcome to have Links to your home pages.
All right reserved Copyright(C)Yoshinao SUGIHARA